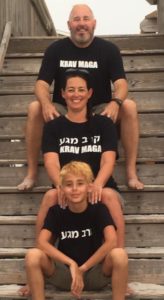 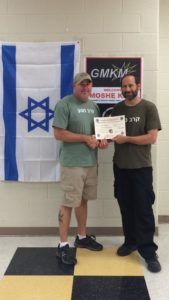 I began studying Krav Maga in October 2011 under the tutelage of Hal Herndon at Georgia Mountain Krav Maga (GMKM).  http://www.georgiamountainkravmaga.com GMKM is an Israeli Krav International school under the guidance of founder Moshe Katz,

After a short time of exposure to IKI Krav Maga, I realized that this was what I had been looking for. I do not have a background in Martial Arts other than childhood Kenpo Karate classes. I thought while stationed in Korea in the Air Force, that I would learn some Korean Martial Arts. A few classes of being a punching and throwing dummy, I realized I did not have the self-discipline for martial arts.

I began my pursuit of a Black Belt in Krav Maga. Training, getting my wife involved, attending seminars and learning about self-defense. Along the way I decided I wanted to teach Krav Maga. I have an educational background through the military and I am a current High School teacher and tennis coach. It was one of the best decisions of my adult life. Nothing is as fulfilling as giving someone who is unsure of themselves, the absolute confidence that IKI Krav Maga provides. It really does work for every one of all skill sets and abilities.

It was a very proud moment to be awarded my IKI Krav Maga Black Belt in Ma’ale Adumim, Israel, Headquarters of Israeli Krav International in the summer of 2016 by Maestro Moshe Katz and Esther Lehman. 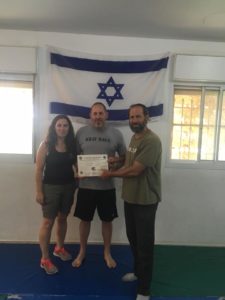 Please go to the IKI web sight linked below and discover more about the history of Krav Maga and IKI Krav Maga in particular.

Helena began training in IKI when I did and it was something we could do together, believe it or not! She studied Aikido while she serving in the Portuguese Air Force. We traveled all over Europe for about 8 years when we lived in Italy, so being aware of her surroundings with an idea towards self defense was there, but IKI Krav Maga truly made her so much more confident and efficient! After a break in training for her higher education, she is back training regular and was awarded Apprentice-Instructor Status by Moshe Katz September 1st, 2018.  Helena is currently a High School Spanish Teacher and has been in the education business for over 16 years. 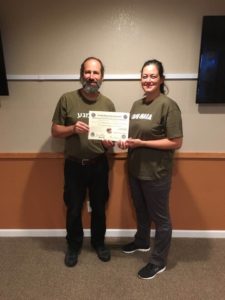 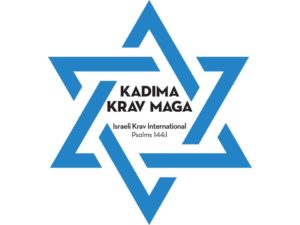 Address
Hours
By appointment Only